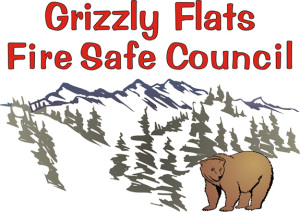 Grizzly Flats is identified by the federal government as a community at risk. The land within and adjacent to Grizzly Flats has heavy fuel loads and steep topography, making it extremely vulnerable to wildfire. It is classified as a wildland/urban interface zone.

The Grizzly Flats Fire Safe Council was formed in 2004 and is a satellite council under the umbrella of the El Dorado County Fire Safe Council. Its membership is comprised of 25 community members.

The mission of the GFFSC is to preserve Grizzly Flats’ natural and manmade resources by informing, educating and mobilizing all residents and private landowners to ensure that their homes, neighborhoods and community are fire safe. To that end and as of this date, the GFFSC has dedicated itself to furthering its mission and goals, and has secured funding and commitments to fund in excess of $1.5 million by way of grant funding for fuel reduction projects throughout its sphere of recognition.